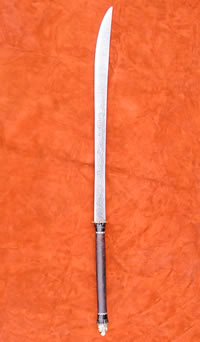 Dha or edged and point based systems include a wide range of lengths and styles of cutting and puncturing weapons. These include:

The Gurkha Kukri is of special interest to Bando. The ABA teaches Gurkha kukri systems that were passed down during WWII. These were outside of the British manual of arms and were passed through various masters in military units. The crossed kukris represent the meeting of the ancient west (Greece) and the modern east (Burma, India, China, and Japan). The kukri has nine parts that are systematically taught as weapons, including the scabbard and accessory knives. Members of the ABA have continued this tradition by training modern Gurkha units in the nearly forgotten uses of the kukri. Gurkhas have used this terrifying weapon in wars throughout history and gained the respect of enemies and allies.