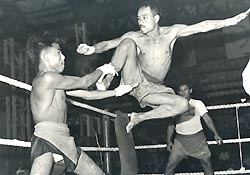 Dr. Gyi’s father would lecture, focusing on the fact that he had discovered three pillars of all systems. First, all martial systems go through a problem solving process. The practitioner asks the question: how do I solve the problem with the resources I have?

Second, all martial systems (by definition) deal with a rule making process. The Elder Gyi would argue that all systems, even military ones, had some fundamental rule-making process. For example, a soldier in combat would possibly face a situation where there could be an issue about killing apparent non-combatants (children with grenades in Vietnam, for example). What are the rules?

The third pillar U Ba Than Gyi articulated was the fact that all systems require their practitioners to make choices within the broader context of rules, as they complete the problem solving process.

In addition to these shared conceptual processes, Dr. Gyi’s father also argued that these processes yielded a well-defined set of common physical aspects in all systems, ways in which the combative equation could be solved. For example, all systems, to some extent or other, have HOLDS, BLOWS and THROWS. Judo emphasizes grappling; Tae Kwon Do emphasizes kicking; Western boxing emphasizes a limited arsenal of hand techniques.

Going even further, Dr. Gyi’s father realized that all systems could be viewed from one of three intentional viewpoints. That is, the ultimate context or application of the system could be identified. Once this was accomplished, its conceptual processes and physical manifestations could be mapped and studied. These intentional/contextual perspectives indicate that systems can have one (or more) of these three elemental objectives: AESTHETICS, ATHLETICS or COMBATICS.

With these three sets of three analytical tools a complex three-dimensional analytical system for dissecting and reconstructing systems to serve a variety of purposes can be created. It now becomes more apparent that the breadth of U Ba Than Gyi’s contribution to the martial arts stretches far beyond the Bando system. These analytical tools can be used with increasing sophistication to understand systems and to facilitate communication between systems. They are the heart of the Bando animal systems.