The Bando Monk System is a comprehensive, yet nonviolent approach to self-defense derived from the ancient Pyu Kingdom (3rd to 9th Centuries A.D.) of north-central Burma. This Pyu Kingdom evolved as a peaceful agrarian society with high ideals and a well-structured environment to support harmonious living. Killing and other acts of violence were virtually nonexistent, and there was no need for restraining devices or prisons. Ultimately destroyed by warrior tribes of the region, the Pyu Kingdom provided fundamental elements and concepts for the Monk System’s development.

Venerable Monk Oopali [also spelled Upali] a Burmese cleric of the latter 9th Century is credited with formalizing the Monk System by establishing a religious order and a systematized method of self-defense. Oopali’s teachings spread throughout the Burmese region with hundreds of followers and numerous temples constructed in his honor. During the 19th Century, His Holiness Mogok Sayadaw, Mandalay Sayadaw, Mingun Sayadaw, Shwebo Sayadaw, and Amapura Sayadaw were the only elder monks who continued teaching nonviolent self-defense in northen Burma. Much of the information pertaining to Oopali has been lost or destroyed over time with only a handful of organizations worldwide, including the American Bando Association, working to preserve his legacy.

The Monk System is not a religion, a doctrine, or a dogma, even though it is based on ancient Hindu and Buddhist principles of nonviolence. It is a disciplined way of life. It is an integrated system of developing the body, the mind, and the spirit to achieve inner harmony and peaceful coexistence with others. Both empty-hand techniques and weapons are used in Monk System self- defense, but the objective is never to maim or to kill. Rather, emphasis is placed on resolving conflicts without the use of violence. Evasion and restraining techniques are preferred in the Monk System, and when strikes are used only nonlethal areas of an opponent’s body are targeted. Preserving life is given the highest priority within the Monk System. 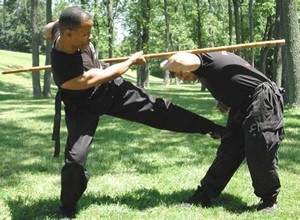 Practices of the Monk System include yoga drills and Min Zin to improve physical well- being and to help the body recover from injury or illness. Monk System yoga drills are similar to those found in India, Nepal, Thailand, and Tibet. Yet, there are some unique practices including Dhanda Yoga (with a long staff), Longi Yoga (with a long rope), and Letha Yoga (with partner manipulation). Min Zin is a comprehensive method for increasing and managing the body’s internal energy. There are many approaches to Min Zin found within the Monk System, including slow- movement meditation, breathing drills, and other focused activities. 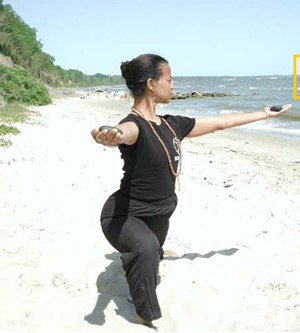 Persons of varying backgrounds and fitness levels can participate in the Monk System. The system was developed to offer appropriate methods for practitioners with limited athletic ability and no experience in traditional martial arts. This includes elderly persons and young children.