The Oath & The Ring 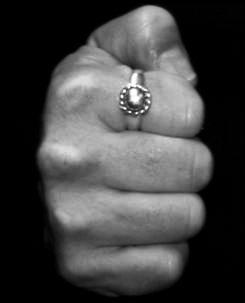 Twentieth Century archeological excavations in Pagan – the capital of the Kingdom of Pagan (1044-1287 A.D.) revealed many human skeletons wearing the same ring on their right forefinger.  These skeletal remains were those of the Royal Guards of the last king of the Burmese Pagan Dynasty and dated from the storming of Pagan by Kublai Khan’s Tarters in 1287.  This is the story of the founding of the Royal Guards, their blood brotherhood initiation and oath of allegiance ritual, and the historic events leading eventually to the destruction of Pagan with the resulting death of the Royal Guards.

According to the Hmannan Yazawindawgyi (The Glass Palace Chronicle of the Kings of Burma), a century and a half after the establishment by King Anawratha of the first consolidated kingdom of the Burmese peoples in 1044 with its capital at Pagan, King Narapatisithu (1173-1210 A.D), was one of King Anawrahta’s successors to the palace. According to tradition at the time, the Royal Guards formed a thwethauksu, that is, a blood brotherhood. In one accepted initiation, each man in turn makes an incision in his flesh and the others drink his blood.  In the other accepted initiation, blood is obtained by killing an animal and is drunk in water or intoxicants in turn by each man.  The resulting brotherhood relationship is recognized in the dhammathat law books.

A royal requirement in Pagan was the ritual of thissa-ye, the Water of Allegiance.  This ritual was performed to affirm allegiance to the Pagan King. Every member of the Royal Guards was required to perform the thissa-ye ritual. The most common thissa-ye ritual sacrificed an animal to the natural spirits and mingled the animal’s blood with intoxicants in water, which was then stirred with the points of swords and spears, and drunk after uttering the oath of allegiance to the king; the blood in the water bound together all the drinkers and the swords/spears typified the violent death which would befall those who broke the oath.  In an alternative thissa-ye ritual, the oath would be written out on paper, the paper burned, the ashes mixed with water, and the mixture then drunk in turn by the oath takers.  Both a thwetheauksu initiation and a thissa-ye ritual would be undertaken by all new Royal Guards.

Also, it is believed these initiated Royal Guards wore the same style of ring on their right forefinger – the finger of physical and mental power – as the sign of their thwethauksu. This silver ring consisted of a solid sphere mouted atop a simple ring base.  The three dimensional sphere – a solid triad – symbolized the unity of the warrior spirits of the individual, of the thwethauksu, and of the spirit world.  The ring was a datloun in that it had the supposed power to protect against spears, swords, snakes, ghosts, and demons.  Datlounds are the end products of an alchemic process performed by a pongyi using mercury and silver in conjunction with fire, water, air, and earth.

Century’s later excavators found the remains of these Royal Guards. The guards lived and died, as a thwethauksu, honoring their thissa-ye to their king both in even their final engagement at Pagan and in the other battles prior to the demise of the Kingdom of Pagan and the First Burmese Empire in the late 1300’s.  This is the lineage and the legacy of the Bando Brotherhood.

Those in the Bando “Family” that attain promotion to the first level of achievement [Black Belt] become “initiated” into the American Bando Association and are entitled to wear this meaningful ring. They undergo a very quiet, candle lit ceremony. The subsequent wearing of this ring bonds initiates traditionally to the ancient Burmese thwethauksu of Royal Guards.  Individual selves are subordinated to the larger immediate association (ABA) and to the even larger warrior spirit.  There is this parallel to the three worlds of man in the meaning of the Bando Symbol.  Members of the American Bando Association undertake the common sacred obligation to preserve and honor the spirit of the warrior and stand ready to discharge this obligation.